By Joe Viglione
Liz Taegel hosts and co-produces Release the Sounds, a program developed at MATV - Malden Access Television. On Saturday, December 17th, at 10 AM during a blizzard, the intrepid crew consisting of co-producer and director Andy Choy, audio wizard David Barker and the camera folk which featured Katie Grace and Julio Magalhaes taped one of the most professional - and humorous - ensembles in New England, Medford's own Jesse & The Hogg Brothers.
With beautiful purple lighting, and the colorful wardrobe essential to the look of the Country rock / Cowpunk presented by the Hogg Brothers,  the B & B label recording artist delivered a dozen tunes with titles such as “White Trash Meth Lab,” “Cashville,” “Fake It,” (She’s Done Gone to the) Gittin Place,” and a song with airplay on local radio stations WMWM Salem, WEMF Cambridge and Somerville’s Boston Free Radio “Biker Ann.”    Biker Ann “drinks more than a man,” which is, of course, all you need to know about her comings and goings.  The group featured Jesse Braintree and Kitty Hogg on vocals, Ray Ray Hogg on guitar and vocals, Kash Hogg and Steve Joe Hogg.    The drummer got caught in the storm and couldn’t make it, showing the versatility of this national act which plays venues from Texas to Las Vegas and everything in between. Their schedule touring the country is quite hectic – which you can find on Reverb Nation:
https://www.reverbnation.com/ jessethehoggbrothers
The schedule is quite amazing, actually, with the ensemble in Salisbury Beach on Saturday January 14 at The Carousel Lounge, Indianapolis Indiana on Jan 19th at the Melody Inn Tavern, Friday the 20th in St Louis at The Way Out Club, Saturday January 21 at The Haunt in St. Louis, Missouri, Friday February 10th at the Third Street Dive in Louisville Kentucky, Saturday February 11th in Newport Kentucky at The Southgate House Revival and back to Boston Thursday February 23 at Hennessy’s Hooley House  before heading to Las Vegas Nevada on March 18th and Manhattan – yes, New York, New York April 15 at the Shrine World Music Venue and a return engagement at Otto’s Shrunken Head on Sunday, April 16.
More dates are scheduled in between those shows, of course.  Quite an achievement for a band based in this region busy working on new vinyl album releases for the legendary Black and Blue record label.
When guitarist Ray Ray Hogg had to exit MATV Stevie Joe, Kash, Kitty and Jesse carried on with “Love Buckets,” “Hogg Tail Twist,” “Cashville,” the Johnny Cash classic “Folsom Prison Blues,” and more.   Then the interview with Liz Taegel concluded a productive Saturday morning / early afternoon in Malden, Massachusetts.
The locally produced program - Release the Sounds - was on hiatus and is back. They tape about a show a month with Positive Negative Man set for February 2017, Blue Manic, Elsewhere and other regional acts scheduled for future interviews, group performance and airplay.  The show airs at 8 PM on Comcast channel 3 and Verizon 28.  Nine shows have been completed thus far 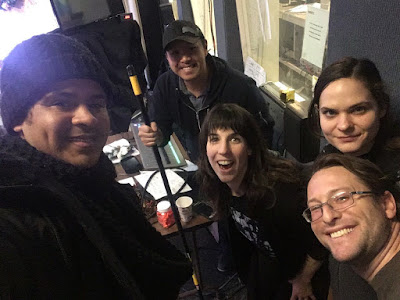 the crew of the program Release the Sounds 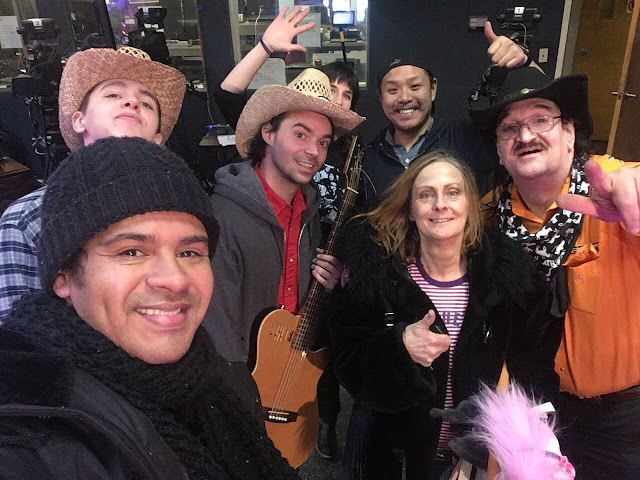 Email ThisBlogThis!Share to TwitterShare to FacebookShare to Pinterest
Labels: B and B records, Country Punk, Cow Punk, Jesse and the Hogg Brothers, Malden Access TV, Rock and Roll